The little orange which can do a lot. Every police officer has one. It is the same orange button which no one wants to hear. It is like time freezes for the next 10 seconds after it has been activated, everyone stops what they are doing and await a location, officers rush out in their numbers to assist a colleague in need… It might be a foot chase, a serious incident or in the worst cases, an officer in danger. 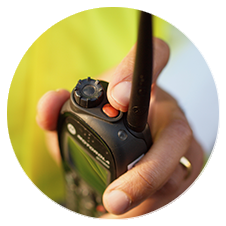 A colleague recently pressed their emergency button on their radio, it is not the first time I have gone to a emergency activation and unfortunately it probably wont be the last. It was a late shift, I was sat in the car with another colleague, *EMERGENCY ACTIVATION* …There was a silence, an eerie one.

All that could be heard was disorder, a lot of it. No one was speaking. My heart started beating quicker, my colleague started driving faster. The control room continued to check up on the officer to see if they were safe & well. Officers dropped everything they were doing to attend the scene, neighbouring areas were sending in their troops… This was the commitment, the passion and the oneness each officer felt about their job and their colleagues. .

It was dark, a cold evening, what would normally be a busy high street in the day and fairly quiet at night had flashing blue and red lights, officers in hi-vis and on-lookers. There was a disorder at a pub; not what an officer would want with people drunk, glass bottles and other items which could be used as weapons. Fortunately, the incident was contained fairly rapidly but a number of individuals being anti-police due to one person getting arrested.

However, what was rewarding was hearing that there were a few kind people who had either called in to the control room to say that they were concerned for the welfare of officers prior to the emergency activation. Others at the location were giving gratitude to officers.

Policing is a lot to do with working with the community – “The police are the public and the public are the police”, Sir Robert Peel. So why did on-lookers have mobile phones out filming what was happening? Why were people against what the police were doing? The police often get scrutinised for what they do when videos and clips are shared on the internet. But there is a saying which goes…

One thought on “The little orange button”